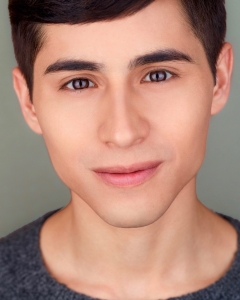 Youth Education Director
caesarphilipe@gmail.com
A recent graduate of The American Academy of Dramatic Arts in New York City and its renowned Academy Company, Caesar Philipe Martinez currently resides in his hometown of San Angelo, Texas, where his love for the arts began. During his time at The Academy he worked alongside industry professionals and was featured in various new works. Notable roles are Jimenez in Star-Spangled: A New Musical, Written and Directed by five time Tony Award Nominee, Douglas Carter Beane (Xanadu, Too Wong Foo), Henry VI in The Richard Project, pieced together from the works of William Shakespeare and Directed by The Royal Shakespeare Company’s Owen Horsley, Itchy in Mr Burns: A Post-Electric Play, Ernst Robel in Spring Awakening, Michael in The Play About My Dad, and Alex in A Bright New Boise.  He was previously represented by Ramonas Model & Talent during his time in New York and will also be featured in various upcoming tv/film projects as well. Look out for him in Russian Room, NBC’s Manifest, NBC’s The Blacklist, and HBO’s High Maintenance.
Now that he is back in San Angelo, he aspires to inspire and give back to the town where he found his footing.  During the 2019-20 season, Caesar assisted Suzy with summer workshops and taught acting classes throughout the school year.  Grateful for the new opportunity to lead our education department, he thanks the terrific Be Theatre team and his family, friends, and partner for their love and support.
<< Return to Staff List