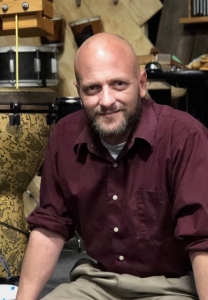 Music Director/Accompanist
David Engelman is a San Angelo native with more than 20 years experience music directing. He received his Bachelors of Music from Angelo State University with a concentration on piano and music education. He has served as Music Director for several shows at Be Theatre including Forbidden Broadway, Five Course Love, Peter and the Starcatcher, and Godspell, among others.

David was featured as Judas in 2019's Godspell and balanced the role of Music Director with his leading role in the show. He has enjoyed many theatre roles throughout his career including the Baker in Into the Woods at Angelo Civic Theatre.

In addition to his duties at Be Theatre, David also teaches orchestra at Lonestar (formerly Lee) Middle School in San Angelo.
<< Return to Staff List